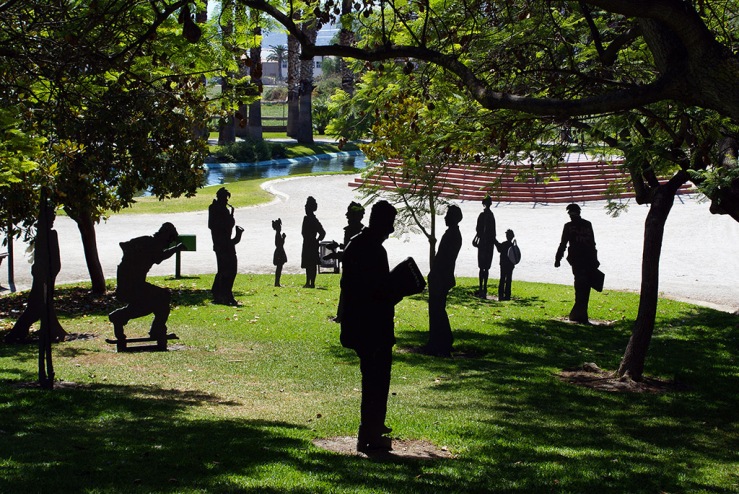 “If a tree falls in a forest and no one is around to hear it, does it make a sound?“

I can think a lot of things and situations associated with this by now famous phrase. Not only about the actual sound but anything that has something to do with perception. Is it the reason why more and more people are becoming materialistic and superficial? It reminds me of the conversation I had with my brother-in-law a while back about a microwave oven. He asked me if I had one back home (I don’t know if the question was triggered by the fact that if I’m on vacation not only I travel light but allow me to directly quote our neighbor, she said: “You don’t look like someone who is living in the land of milk and honey.”) and I answered yes, I have and he said:

“What is the use of having things when no one see them.”

Me: I’m not sure I understand.

Him: To verify if it is indeed the truth.

I think what he meant is: What is the use of having beautiful -wow factor -it -branded- things that show you made it if there is no one there to impress. (The objects of sense exist only when they are perceived.) Do we have to own status items to show/feel that we if not better are as good as the rest? Do we have to wave flags to get notice or belong to any tribe? If it is so why no one hear our protest against everything we are not agreed about but continue to happen? Why despite of rallies, social media rants, violent protests, violence in general and hyped media attentions no one seems to hear what the majority of people are now shouting on the streets?

“Sound is vibration, transmitted to our senses through the mechanism of the ear, and recognized as sound only at our nerve centers. The falling of the tree or any other disturbance will produce vibration of the air. If there be no ears to hear, there will be no sound.”

Are our sights perception enhanced overtime but to counterbalance it we become deaf? How come we hear what we want to hear and disregard the rest? After selective memory selective amnesia we now have selective hearing as well? Things become only a reality if there is a witness. How come no one take global warming seriously? I saw a documentary yesterday about Bangladesh. There is a place there that is losing two kilometers of land each month to the water because of global warming. Does anybody (except for people there who are directly affected) worry about the seriousness of the fact? I doubt it.

“Can something exist without being perceived? What is it to say that it exists when such an existence is unknown?”

Ha! I bet it means: It only counts if it is human beings that are able to perceive it. It doesn’t matter if it is there for thousands of years and have seen by other animals and insects, as long as no human behold the sight of it, it remains nonexistent.

“To be is to be perceived.”

Fuel to the fire to become more shallow, more image and status driven, more materialistic and less compassionate. People only take notice of you when you rise from mediocrity and become big. No wonder those who often made it are the ones without scruples. The end justify the means. Doesn’t matter how you get there as long as you reached the top you made it, you are now visible. That’s the end line, that’s the goal, to be seen or otherwise there is no use existing.

“What is the difference between what something is, and how it appears?”

The difference between perception of an object and how an object really is- is appearance of course. That’s why most people are obsessed with self-image/mental image which is seldom in accordance with reality. The truth is we don’t really know how others perceive us. How we think they see us is based on how we see ourselves. You will be surprise how wrong we are on guessing how others truly view, judge and value us. Having said that let me state also that the majority judge others by appearance. Go to high end stores dress up like normal people and you will understand what I mean. So, perhaps we can’t blame others on focusing too much on outward appearance. But then again… it is a never ending circle.

“22 Appearances are one’s own mind. From the beginning, mind’s nature is free from the extremes of elaboration. Knowing this, not to engage the mind in subject-object duality is the bodhisattva’s practice.”

One day the monks at Huang-mei monastery were instructed to write a stanza in order that their master Hung-jen might decide who would inherit the dharma throne. All of the monks assumed that a certain senior disciple Shen-hsui would win and thus didn’t even bother writing stanzas. Shen-hsui assumed he would win too, and wrote the following stanza on the monastery wall:

The body is a Bodhi tree,
the mind a standing mirror bright.
At all times polish it diligently,
and let no dust alight.

Due to the danger surrounding him if he were to openly challenge the senior monk Shen-hsui, Hui-neng went out one night while it was completely dark and wrote the following stanza in secret:

Bodhi originally has no tree.
The bright mirror also has no stand.
Fundamentally there is not a single thing.
Where could dust arise?

Later, master Hung-jen saw this stanza and reaffirmed that he who had written it had indeed opened his mind’s eye. Finding it was Hui-neng, master Hung-jen then gave Hui-neng the secret dharma teachings of their lineage, which Hui-neng says completely opened his mind, and gave the young Hui-neng the dharma robe and stick, symbolizing his status as Patriarch of the lineage. Hui-neng started the Sudden School which taught that Mind is realized instantaneously while Shen-hsui started the Gradual School which taught, similar to his stanza above, a sort of dust-wiping meditation. Zen today embodies Hui-neng’s Sudden School style. (source: Wikipedia)