I went to the hospital for MRI scan the other day. I arrived there around 6:30 in the morning. My appointment was at 7:00 o’clock. My GP said I had to be there 30 minutes before. That means I didn’t sleep that night, no breakfast either. Appointments terrify me. Especially medical appointments. I hate hospitals (fancy that considering my work background) and anything that includes spending time in a waiting room. Patience is not one of my virtues. That’s why I rarely take a bath. Waiting for the tub to be filled bore me to death.

The lobby was practically deserted when I arrived, except for the cleaning lady who told me I had to wait for someone to sign me up before I can proceed and no, I really cannot go straight to the radiology department even though I had an appointment so, I contented myself watching her driving this noisy machine over the floor. I noticed that she missed several spots. To think that these people often earn more than caregivers and they don’t have to work in ungodly shifts and not liable for anything. Unfair. I quickly shifted my forced interest to a cake cabinet standing haphazardly in one corner next to the entrance to the cafeteria close to the window of the gift shop next door. It housed some unappetizing bunch that looked like some forgotten morsels from a distant  birthday party that have gone wrong. I shuddered with the thought. yuck!

More people arrived. I tried to distinguish patients from hospitals workers. Not easy when everyone wear casuals. Anyone could be anybody. I gave up. When my numbered flashed on the monitor overhead I went to the window and was shocked to find a girl behind the computer screen. How old was she? fourteen? fifteen? She was wearing some gothic fashion rings which in any other circumstances I will find beautiful and probably wear myself, but in that setting… I half-expecting her to open a bottle of neon colored nail polish and start painting her nails. No, I am not being judgmental. Just saying how I felt at that moment.

I made it to the waiting room without any accident. They gave me some form to sign. Pretty basic information like pacemaker, pregnancy, operation, claustrophobia, that sort of things. I was glad I was the first to arrive. It means I can get out of there soon and go to work as if nothing happened. When they called the first patient, it wasn’t my name; I was puzzled. My appointment was at 7:00, it was almost 30 minutest past, I begun to wonder about under what kind of file system these people are operating. I walked myself to the information and asked. They didn’t answer my question but promised me I will be the next. That was good enough for me.

True to their words, after quarter of an hour they sent me into a cubicle with two doors at both ends. A woman told me to lock the door closer to me, strip naked and put on  the hospital gown which was folded neatly on a chair.  There were 3 hooks on one corner of the wall and a mirror next to it. As usual, they were too high for me, but they provided a chair for me to stand on, no?

It took another quarter of an hour before the door to my right opened and the same woman called me in. By that time I was so nervous I could jumped out of my skin. You see, I can (and I did numerous times) jump from the top of a train bridge knowing there were submerged pillars under the water to tie boats and trains can pass by any moment, or somersault from the top of waterfalls while from up there I can see there were rocks underneath and if I don’t hit the right spot it could cost my life. I roamed around in cemeteries in the night playing spirit of the glass. I broke in empty dilapidated/abandoned houses just for fun, climbed on roofs to watch the moon and rowed boats in the middle of a storm but I am terrified of MRI scan I was practically shitting in my pants.

The radiologist instructed me to lie down and told me not to move an inch in any circumstances for whatever reason. She locked my head in one place by placing some sort of frame over me after giving me earplugs and placing a huge headphone over my head. She also informed me that the process will take 15-to 90 minutes and handed me a sort of rubber ball attached to a hose which strongly reminds me of a giant perfume sprayer. It’s a bell she said. In case something will happen.  I wanted to shout: Something could happen??? But I keep quiet. The sooner I get out of there, the better. I was happy enough she didn’t need to inject me with contrast dye like the last time. I closed my eyes and started counting. I can never managed to open them during the procedure. I have this feeling that if I do that, some radiation (I know it’s magnetic)  will rendered me blind for the rest of my life. Also, I am scared to see the inside of the cylinder and how tight it is. I am not claustrophobic but during every MRI scan I underwent, temporarily I am. So much so that I have a very strong urge to bolt upright and run away from there as fast as I could.

Counting didn’t work so, I started breathing slowly and deliberately. When that failed as well I tried singing Two Less Lonely People In The World by Air Supply, my favorite band. Though I can recall the lyrics perfectly well, it failed to do the trick. I noticed I begun singing them higher and higher in my head till it reached a hysterical pitch. How long I still have to wait? How long is 15 minutes (or more) in this torture chamber? My knees started twitching and I  was in danger of opening my eyes and sitting upright. It took all the courage I could muster to lie there perfectly still.

Just when I  thought I could not handle it anymore, the motorized bed slid down and I was told it was over. I never been more relieved to be dismiss in my life than in that moment. I dressed in record time, jumped in the car and drove in search of a bakery. I desperately needed some donuts, my current addiction.  I glanced at the paper next to me in the passenger seat. It contains some information I need to check to find out the result of my scan online. I decided it could wait. I know that I will find there nothing new, only worse… 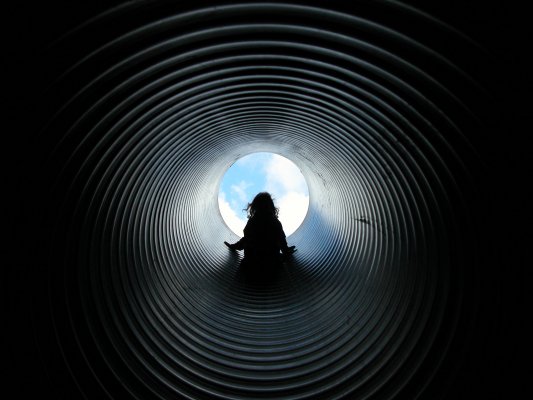